Oxford East LibDems have chosen Prakash Sharma as their candidate for the upcoming Cowley ward by-election on 17th July, precipated by the resignation of a Labour councillor shortly after the 2014 local election results were declared. 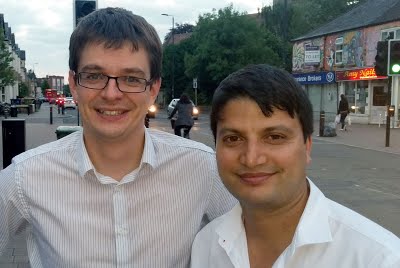 Oxford East LibDems have chosen Prakash Sharma as their candidate for the upcoming Cowley ward by-election on 17th July, precipated by the resignation of a Labour councillor shortly after the 2014 local election results were declared.
Prakash has lived in Oxford for almost 15 years and is considered somewhat of a pillar of the Nepalese community here.  He has many family members living in the Cowley ward and they all do a considerable amount of good work for the whole community.
Prakash is the proprietor of the area’s popular Everest Nepalese restaurant, having resurrected it from the once-dying Donnington Arms pub.  More recently he has taken on the Kadai & Naan restaurant on Cowley Road.
Commenting on his selection Prakash said,
"Labour has been ignoring the wishes of the people of Cowley for far too long and I believe they deserve better.  The way our local facilities such as Temple Cowley Pools, the Community Centre and the Cowley Centre Post Office have been eroded away by the arrogant Labour City Council is outrageous and it just cannot be allowed to go on.
“During my time in Oxford it has been a pleasure to meet and serve so many people and the welcome and support given to me, my wife and my small child by this City and its people has been wonderful. I am delighted and honoured to have the opportunity to give something back to our community as a councillor. I am passionate about ending Labour’s contemptuous treatment of the people of Cowley ward and relish the chance to promote liberalism, fairness, community and equality for all.”
Mark Mann, parliamentary spokesperson for Oxford East said he was delighted to have Prakash represent the Liberal Democrats in Cowley.
He added: “Like many local residents Prakash knows that the Liberal Democrats are standing up for the people of Oxford by holding the Labour Council to account as the official opposition. Nationally we have been taking the difficult decision they weren't prepared to take in order to fix the economic mess they helped create.
“The fact that Prakash has been able to expand and diversify his businesses show that our tough economic decisions in government have helped create a stronger economy and fairer society so that everyone can get on in life.”