Rival plans to reform local government in Oxfordshire have been rejected by the government and local councils have instead agreed to to work together to come up with a single joint proposal for reform. But with rival studies published today recommending different options, there is still some way to go before there is an agreed position.

Earlier in the year, two different proposals to replace the current system of local government in Oxfordshire were put forward by local council leaders. One proposal was to replace all six local councils with a single new authority, while the other proposal involved their replacement by four separate unitary authorities, potentially in combination with parts of neighbouring counties.

Following rejection of these different proposals by the Department for Communities and Local Government, all six councils have now agreed to work together to come up with a joint proposal. Their joint statement, published on 19 July 2016 is set out below.

It will be interesting to see how our local councils come together to agree a single option to put forward to central government.

The current system of local government in Oxfordshire

The map below shows the areas of the five district councils that, together with Oxfordshire County Council covering the whole area shown below, currently make up local government in Oxfordshire. 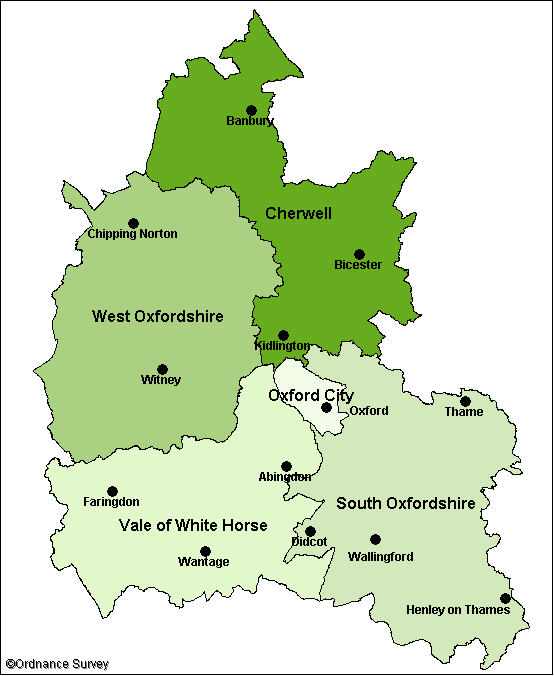 "With a new Prime Minister and new Secretary of State now in place and a number of pressing economic and policy issues to work through at national level, we recognise that it is sensible to take the time to understand how the government intends to take forward devolution and local government reorganisation in Oxfordshire and other areas before presenting further proposals for reforming public services and changes to council structures in the county.

Following discussions with civil servants last week all the Oxfordshire councils have agreed to work together to discuss areas of common ground, assess potential options and establish whether we can agree a way forward building on the work we have both done to date. We have agreed to postpone publication of both the Grant Thornton and PwC studies, and pause plans for consultation until these plans have been jointly developed.

Our aim has always been to seek investment in housing and transport infrastructure; to improve skills training and develop the local economy. This investment is needed if we are to reach our potential, and therefore agreeing a way forward with government is a high priority for all of us."