Adam Knight, a successful venture capitalist and a former managing director of Goldman Sachs, and candidate in the Witney by-election, has endorsed the Liberal Democrat Liz Leffman. 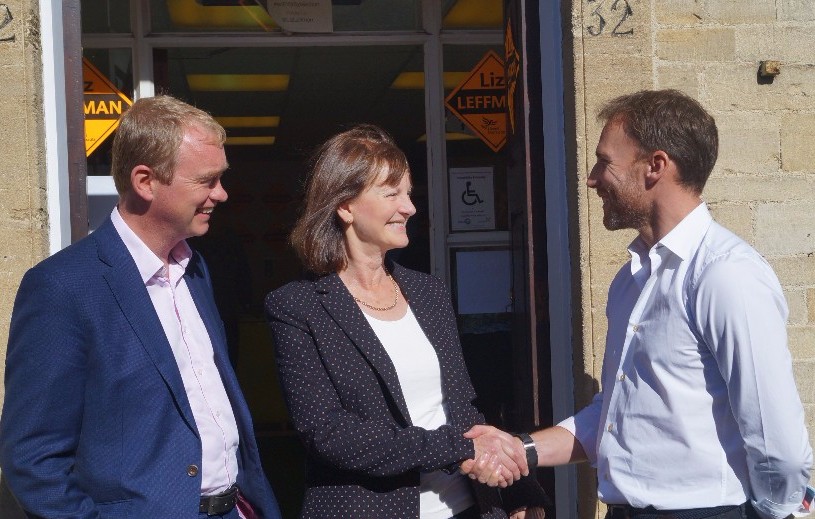 After meeting Liz in Witney, Adam has agreed to throw the full-weight of his campaign behind Liz.  He is now an Angel Investor, supporting initiatives to give opportunities to young people, and has previously been Head of Commodities for Credit Suisse. He was educated locally and is campaigning to bring more affordable housing to a greater swathe of the population.

Liz Leffman said: "It is a great boost to have Adam's backing. We are on the same page on so many issues facing West Oxfordshire today; on Brexit, the NHS, and on housing.

"I have been shocked at some of the divisive language used at the Conservative Conference, on immigration, on business and on investment, particularly around housing. They are moving the conversation towards a hard Brexit. All of these things are negative for all of us and need to be fought.

"We need to come together and unite over the things we agree on, and I see a lot of what I stand for in Liz's campaign.

"Liz has the momentum, she is the only one in a position to beat the Conservatives, that is why I am backing her ."

“I am delighted to have Adam Knight's backing. He has some really compelling ideas on how to enable more people in Britain to get on the housing ladder.

“The Liberal Democrats are now the free market, free trade, pro-business party. With the Conservatives intent on yanking us out of the Single Market and Labour lacking any economic credibility, we are the only party capable of creating opportunity in a stable economy. It is hugely significant that someone of Adam’s standing in the business community should recognise that support for the Liberal Democrats in this crucial by-election is support for British business.

“The Liberal Democrats are the real opposition to the Conservative Brexit government, fighting to keep Britain open, tolerant and united.”