Andrew Gant, Leader of the Oxford City Council Liberal Democrat Group has issued a statement on the current status of the Woodstock and Banbury Rd corridor projects. 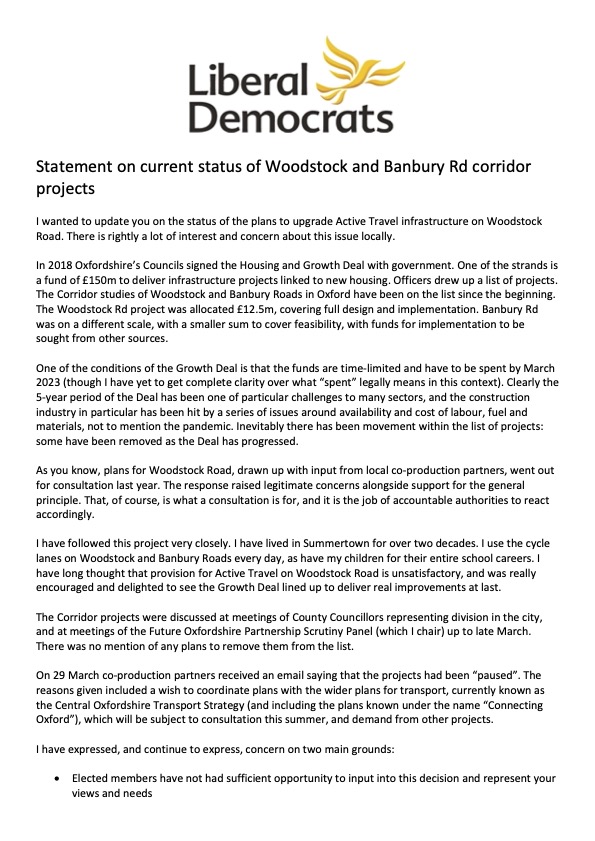 I wanted to update you on the status of the plans to upgrade Active Travel infrastructure on Woodstock Road. There is rightly a lot of interest and concern about this issue locally.

In 2018 Oxfordshire’s Councils signed the Housing and Growth Deal with government. One of the strands is a fund of £150m to deliver infrastructure projects linked to new housing. Officers drew up a list of projects. The Corridor studies of Woodstock and Banbury Roads in Oxford have been on the list since the beginning. The Woodstock Rd project was allocated £12.5m, covering full design and implementation. Banbury Rd was on a different scale, with a smaller sum to cover feasibility, with funds for implementation to be sought from other sources.

One of the conditions of the Growth Deal is that the funds are time-limited and have to be spent by March 2023 (though I have yet to get complete clarity over what “spent” legally means in this context). Clearly the 5-year period of the Deal has been one of particular challenges to many sectors, and the construction industry in particular has been hit by a series of issues around availability and cost of labour, fuel and materials, not to mention the pandemic. Inevitably there has been movement within the list of projects: some have been removed as the Deal has progressed.

As you know, plans for Woodstock Road, drawn up with input from local co-production partners, went out for consultation last year. The response raised legitimate concerns alongside support for the general principle. That, of course, is what a consultation is for, and it is the job of accountable authorities to react accordingly.

I have followed this project very closely. I have lived in Summertown for over two decades. I use the cycle lanes on Woodstock and Banbury Roads every day, as have my children for their entire school careers. I have long thought that provision for Active Travel on Woodstock Road is unsatisfactory, and was really encouraged and delighted to see the Growth Deal lined up to deliver real improvements at last.

The Corridor projects were discussed at meetings of County Councillors representing division in the city, and at meetings of the Future Oxfordshire Partnership Scrutiny Panel (which I chair) up to late March. There was no mention of any plans to remove them from the list.

On 29 March co-production partners received an email saying that the projects had been “paused”. The reasons given included a wish to coordinate plans with the wider plans for transport, currently known as the Central Oxfordshire Transport Strategy (and including the plans known under the name “Connecting Oxford”), which will be subject to consultation this summer, and demand from other projects.

I have expressed, and continue to express, concern on two main grounds:

I have engaged with senior officers and Cabinet members. They have confirmed that the list of schemes is under review. No decisions have been taken. Recommendations will come to meetings of relevant bodies in June and July for decision. I asked a written question to County Cabinet member Cllr Duncan Enright (Labour) at the Cabinet meeting on April 26. Here are relevant extracts:

Question: “Will the Cabinet member confirm that these two projects have not been “scrapped”, but will be kept under active consideration as part of any review of the HfI list?”

Answer: “The Woodstock and Banbury Road schemes are currently on the list of growth deal schemes ... Any changes to schemes in the capital programme will be made through the proper decision-making process”.

Regrettably, it appears that Labour City Council candidates engaged in public discussion of this issue have stated that the projects have been cancelled. This is not the case. In addition, some residents appear to have been led to believe that a decision to cancel has been made by an individual County Cabinet member. This is also not the case: decision-making is collective, and the exchanges referred to above make it clear that this will involve a proper process.

I do not believe that the Corridor projects should be removed from the list of Growth Deal-funded schemes. I will continue to make that case. I will also do all I can to ensure that the “proper decision- making process” is fully open and accountable to both members and the public. I don’t know what the outcome will be, but do need your views.

Please keep in touch with us.