He writes, "I cannot believe that 6 months has now passed since I was elected. I have learnt so much from the 10 parishes I represent and the excellent community initiatives that have been going on, some for many years. Thank you for helping me to facilitate these and get the extra help needed.

Here's a breakdown of what is happening across the division and some of the work I have been doing, starting with one of the smallest parishes, Kiddington.

Work on the small stretch of the A44 to improve safety by highlighting speed reduction on existing signs will begin shortly. The change in speed limit from 50mph to40 mph is often ignored and makes crossing the A44 from the bus stop to the village pretty scary. This will help to alert drivers to their responsibilities and may be enforced with mobile police enforcement.

An accident with a young horse rider and a speeding van through the village (who did not stop) happened in the last 2 weeks. Residents met with highways officers on site and as a result are applying for the scheme to reduce the speed limit from 30 mph to 20 mph.

In addition, we are investigating flooding solutions for that part of the village. It's been happening for years and an engineer is due out in December.

I'm pleased that work on the 30mph to 20mph scheme has been endorsed by the parish council. Officers are preparing the draft scheme for consideration. 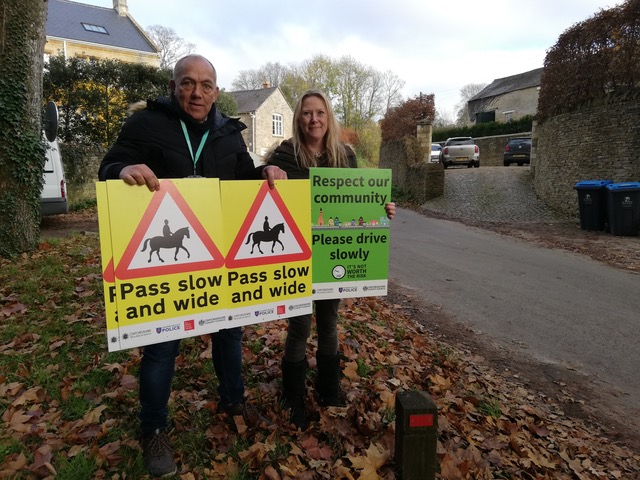 A timeline, financial costings, issues of enforcement and the public consultation process is being finalised so that we get the best solution for Woodstock residents, businesses and visitors. A massive thanks to OCC officers who have visually prepared the plans and the residents who have emailed together with the work of Woodstock Traffic Advisory Group for their valuable contributions.

The 30 mph to 20 mph scheme will be put in place, building on the pedestrian safety work completed for the A44. This is currently being costed.

The revised plans for the Banbury Road development have just been submitted and residents and interested groups who I had the pleasure of meeting recently—such as Sustainable Old Woodstock—are encouraging everyone to make your views known. As soon as you can, go to West Oxfordshire District Council website, planning applications, and type in Banbury Road and the documents can be viewed.

Whilst this is a West Oxfordshire Planning decision the County is consulted on issues related to highways, schooling and infrastructure matters and I will be making my comments known shortly.

The issues of the bridge at the Black Prince and essential repairs is now being scheduled to take place and some remedial work has been carried out.

The issue of a new upgraded heath centre is being moved forward. I've raised the issue at at a HOSC meeting this week and with senior officers at OCC, where it has been agreed to fund a feasibility study in partnership with WODC and Blenheim to look at the options for Hensington Road. A further meeting is scheduled with Oxfordshire Clinical Commissioning Group and key stakeholders next month.

A central location is a priority (Cllrs Cooper and Poskitt have continued to work on this) and the need for a more permanent solution for the library is being examined. I have written to Cabinet Member Neil Fawcett, responsible for libraries and heritage, to ask that this is prioritised.

The Stonesfield Parish Council—with the partnership support of the SAFER group and OCC officers—had the 30 mph to 20 mph scheme approved a few weeks ago and I believe the scheme is now going to be implemented within the next few months. A real partnership in action and I was pleased to play my  small part in supporting what most of the village had been working on for sometime. Congratulations for making our villages safer!

Both Cllr Parkinson and I have been giving some considerable attention to the development in the Farley Lane/Davis Close area, ensuring planning conditions are being met and enforced. We have met with residents and we are expecting this to be more effectively actioned.

Building in our villages has to be planned carefully to meet the needs of a growing community with appropriate-sized dwellings and also giving due attention to this AONB.

The reducing the speed limit scheme is now almost finalised and costed and, subject to this being agreed by the parish, I expect this to be scheduled for implementation in the new year.

A resident who has much experience in archaeological digs believes there is evidence of remains of a Roman settlement. He plans to have some work one to determine this and I will be using some of my priority fund to support the costs of some excavation work subject to funding from other sources being found. This could be significant and deserves support.

Although there is no reducing the speed limit scheme in the village, this will be addressed at the January meeting of the parish council when a decision may be taken. Residents may wish to contact me or parish councillors to make their views known.

Regarding the public footpath closure: The site has been re-inspected by the specialist contractor, and they have outlined a minimum of 3 actions which need to be carried out before the bridleway re-opened. One of these action points is to install a 57m section of fencing alongside the bridleway.

We are aware of the implications of this bridleway remaining closed and are aiming to have it reopened next month.

Work regarding flooding mitigation continues with meetings with OCC, the parish council and landowners. Next site meeting, 30th November, I will be attending to agree actions. Some work on the retention basin and the clearing of gullies have already been carried out

I'm happy to report that I have secured funding of Section 106 money to contribute to reducing the speed limit from 30 mph to 20 mph. Speeding traffic along this busy road and safety concerns has had big impact on residents and we need a permanent solution.

More questions? You can also email Andy at [email protected]