Edward Mortimer is standing in the Oxfordshire County Council elections on 4 May 2017 as the Liberal Democrat candidate for the county division of Burford & Carterton. 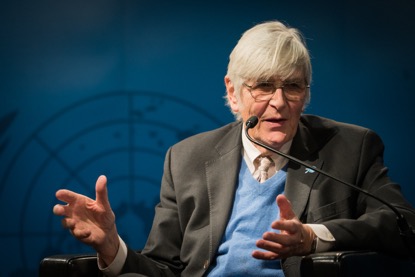 Edward Mortimer CMG is a Distinguished Fellow of All Souls College, Oxford and was a journalist on The Times (1967-85) and the Financial Times (1987-98).

From 1998 to 2006 he served as Chief Speechwriter and Director of Communications to UN Secretary-General Kofi Annan, and from 2007 to 2011 as Chief Programme Officer of the Salzburg Global Seminar.

He is now an activist and consultant on global governance, human rights, the management of diversity in modern Western societies, and the politics and history of the Middle East. He is President of the British Association of Former UN Civil Servants, and chairs the UK branches of Independent Diplomat and the Children’s Radio Foundation. He has written, inter alia, Faith and Power: the Politics of Islam (1982) and (with Timothy Garton Ash and Kerem Öktem) Freedom in Diversity (2013). In 2014-15 he was an adviser to The Elders on strengthening the United Nations.

Edward was born in Burford in 1943, and it has been his main home since 1971. As a founder member of the SDP, he was the SDP-Liberal Alliance candidate for the European Parliament in Surrey West in 1984. Edward's wife, Elizabeth Mortimer, was the District Councillor for Burford from 1994 to 1998.