I have had concerns about traffic and transport issues in local villages for some time.

I have been running a campaign for a lower speed limit on the dangerous Lower Road in Hanborough.

Lower Road is a narrow, winding, unclassified country road, which runs from the A4095 junction east of Long Hanborough to the Eynsham roundabout on the A40.

In recent years, it has become a busy traffic corridor due to massive growth in population and intensified business and commerce activities.

The imminent expansion of Eynsham will make matters much worse.

Hundreds of local residents have signed my petition which I presented to the County Council on Tuesday 23rd March.

The Conservatives agreed a Local Plan that will deliver thousands more houses, but without the infrastructure needed to support them.

We oppose the construction of 1400 new homes in North Witney and support the campaign calling for a rethink of the North Witney housing development.

The development would have a detrimental impact on traffic and air pollution in the historic, northern part of Witney.

The site is susceptible to flooding and many of the proposed roads will be built on flood plains. This is not sustainable!

We must have infrastructure in place before development.

The Lib Dems are leading a campaign to reconnect the railway link between Oxford and Witney and Carterton.

Our proposals are quickly gathering pace and a public backed feasibility study is now underway.

98% of respondents to an independent survey support this plan. A new railway would vastly improve public transport for the residents, leading to less traffic on the A40 and reduced levels of pollution.

We are also calling for a doubling of the Cotswold Line along its entire length. We now need to get the message across to Conservative MP Robert Courts and the Conservative County Council, that simply doubling the line from Hanborough to Oxford is not good enough.

If you haven’t yet signed the petition you can do so by clicking the picture below.

Please pass this link on to your friends and neighbours and ask them to sign as well; the more people that do, the more likely the Conservative-run County Council will hear us. 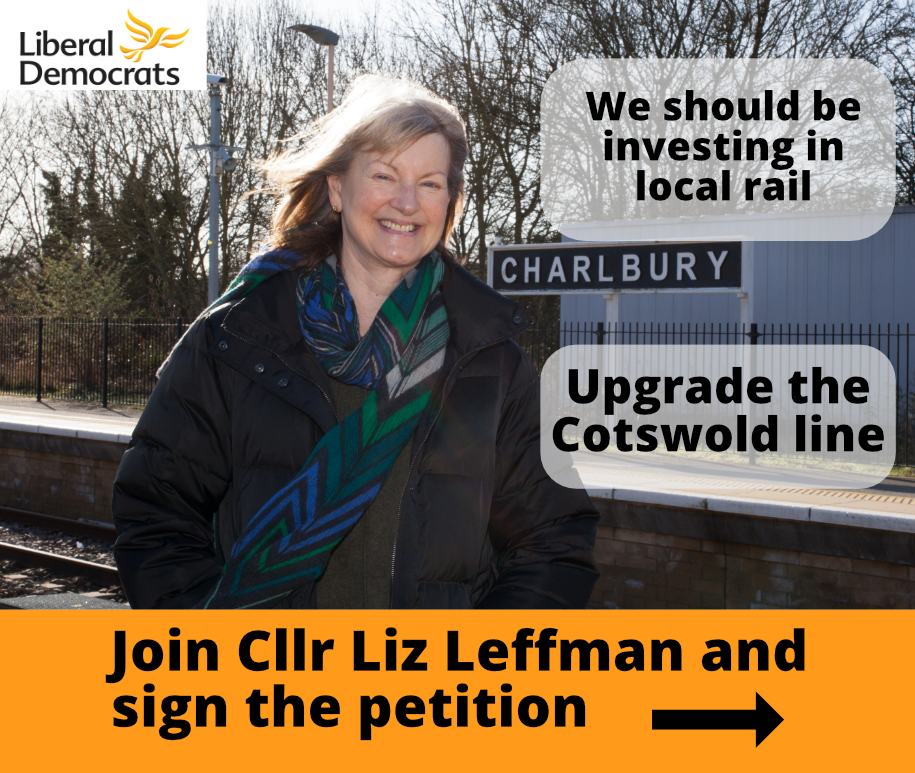